How many times have you heard the lie that we must keep abortion legal to save women’s lives? I can’t count the number of times I’ve heard this monstrous lie. And that is just what it is. A monstrous lie. A fabrication. An absurd and false claim that is nothing but a ridiculous attempt by some people to rationalize the destruction of those who they consider to be unwanted or inconvenient. It’s a lie often told by those who pretend to be rational, upright, responsible and–this is my favorite–compassionate.

Well, I never believed it. And doctors in Ireland don’t believe it either. (See video below or on YouTube.) They have testified in a court of law that abortion is never medically necessary to save a pregnant woman’s life and that life-saving healthcare is never denied to a pregnant woman in Ireland either. In fact, despite the ban on abortion in Ireland, it’s one of the safest places in the world for women to have children according to the United Nations. (Well, perhaps it’s because abortion is banned; it’s pro-life!) So next time you hear someone lying about how abortion is necessary, speak up. And tell that person to admit that he or she is pro-choice, that choice being the death of an innocent child in the womb.

From the story at LifeSiteNews:

That good news has been confirmed by medical experts, and is borne out by Ireland’s experience in maternal healthcare. The demonstrable, verifiable, and certain truth is that abortion is not needed to save a mother’s life. The only purpose of abortion is to kill a baby. 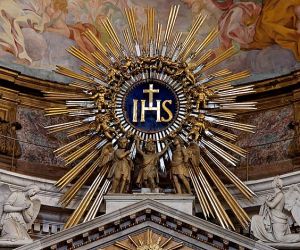 January is devoted to the Holy Name of Jesus. Image: IHS monogram, on top of the main altar of the Gesù, Rome, Italy. via Wikimedia Commons, public domain.

The Catholic Book of the Month series continues on Thursdays. Current: Introduction to the Spiritual Life: Walking the Path of Prayer with Jesus, by Brant Pitre.