[Note: This page has several photos on it, so I’m not posting the whole thing on the front page of the blog. See the post page for all the photos. Thanks!] I’ve been sitting in a cafe downloading and editing photos from the Stand Up For Religious Freedom Rally in Birmingham, AL, that took place from noon until around 1 p.m. today.

Didn’t realize that today is Fr. Coyle’s birthday. Who’s Fr. Coyle? He was a Catholic priest at St. Paul’s in downtown Birmingham, back before St. Paul’s was made the cathedral. He worked very hard to bring people together, used to pray the Divine Office on the steps outside the St. Paul’s so he could be close to those passing by. He was threatened many times for the audacity of true hope, for taking Christ’s prayer that we all be one seriously and doing something about it.

In 1921 Fr. Coyle was murdered as he sat on the front porch of the rectory. By a Methodist minister who hated Catholics. By a Klansman who hated that his daughter had become a Catholic. Who hated that she was marrying someone with dark skin. Hugo Black defended the Klansman/minister and the jury found him not guilty. Not long after that Black joined the KKK himself.

Today on the sidewalk in front of the Hugo Black Courthouse in Birmingham, Alabama, people from across the spectrum of Christianity joined together in prayer and in support of each other and pledged to stand together in the face of an onslaught of attacks from our federal government against the religious liberty upon which our great nation was founded. The brunt of this attack is being felt by the Catholic Church but though she is the main target, she is not the only target. Make no mistake: our government has in its sights each and every person of faith who lives within the borders of the United States. Who else will stand against Caesar if not the Church? Who else does Caesar want so badly to control?

As one of the several pastors who spoke today pointed out, Hugo Black had a change of heart and mind later in life. He took a stand in the early civil rights movement. God changed Hugo Black. Let us pray that God will change Barack Obama and his godless administration and that our country will return to the commitment to freedom that once made her the hope of the nations.

If America no longer stands for freedom, then who? If the Church does not stand up to the American government, then who? 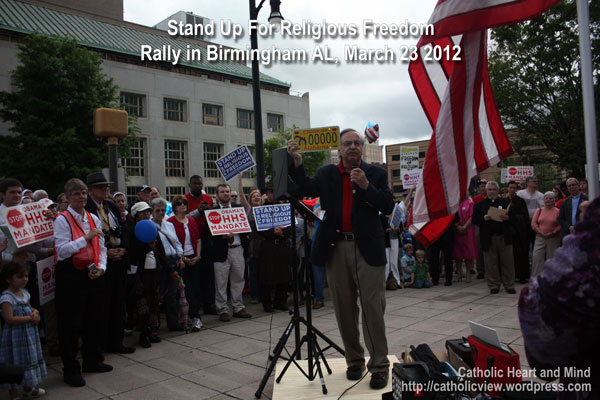 4 thoughts on “Stand Up For Religious Freedom, Birmingham, Photos and Thoughts, Part 1”

Octave of Christian Unity: A series of posts, annotated TOC.