I was walking down the sidewalk, Rosary in hand as I prayed the Sorrowful Mysteries, my lips moving silently under the piece of red duct tape covering my mouth—my show of solidarity with people all over the country on this day of silence to promote the Culture of Life and help end the culture of death. There were six of us today, praying outside the abortion mill. I had just reached the driveway entrance into the abortion mill parking lot and had turned and headed back down the sidewalk, deep in meditation, when I heard several sets of footsteps behind me. Then a young boy’s voice said, “Excuse me!” He didn’t yell, but the sound wasn’t gentle either, more of a challenge than merely trying to get my attention. After a moment, I realized he was speaking to me—I was the only member of the vigil at that end of the sidewalk. I slowly lifted my eyes and peeled the tape off my mouth and smiled at him.

He took my smile as the invitation that it was. And launched in on me, pouncing with all the force his little tiger paws could muster. (He was probably in high school, but the old I get, the younger that age seems. Even college age seems so very young to me now.) His friends kept walking but he couldn’t resist having found someone to argue with. At least, he thought he’d found someone to argue with. At that moment all I could think about was the fact that this young child was about to try to convince me (or himself) that the murder of another child could be somehow justified. And it filled me with sadness. And compassion.

He took a deep breath and squared his shoulders. I kept my breathing even and my shoulders open and soft. I’m not interested in sparring, have no intention of fighting. I’m pro-life, not merely anti-anything. Some people don’t seem to get that.

“Listen, what if a woman is pregnant and can’t afford to have a baby—?” He began to circle around me. I moved with him and looked him in the eye, still smiling gently.

“Then there is adoption. I’m adopted. I’m glad the woman who gave birth to me realized that killing me was not the answer.”

“But some women don’t want to give up the child once the baby’s born.” He moved closer. I faced him, keeping my eyes fixed on his, thinking how young he was for his heart to have grown so hard.

“I’d rather go through some pain than kill my child. Killing is not the answer.”

He stopped as if thinking about what he had been saying, hearing his words for perhaps the first time, realizing, for the first time, that he was saying that some children should live and some should die, for no other reason than that someone else doesn’t want to be bothered with them, doesn’t want to accept any suffering and is willing to snuff out the life of a child, his or her own child, to avoid that suffering.

No matter how real that suffering may or may not be, I pray that men and women everywhere will have the strength and the grace to face it, to embrace it, and to embrace the gift of life that God has given them.

My young friend seemed really and truly shaken and moved away from me, moved away to follow his friends, deep in thought. I hope he thinks about our conversation. I hope he thinks a long time about it and doesn’t forget about it or shove it out of his mind. I hope that the Lord will shine the Light of His Wisdom into that young boy’s mind and pour Charity and Mercy into his heart. I hope that he will experience conversion of mind and heart and serve Christ and the Culture of Life, and join the millions of us who are praying and working to end the culture of death—the culture of death that could have aborted me then and would be even more likely to do so now, had I been born in this time instead of all those many years ago. I hope that someday, God willing, he will marry a woman who will love him deeply and, God willing, that they will raise a family and live lives filled with the Truth and Beauty and Goodness and Joy that come only from the Author of these things, the Author of life and the Giver of Eternal Life, the Giver of all good gifts, He Who is Love and Mercy itself.

I pray that that young man will one day have a conversation much like the one we had today. And that his heart will be filled with compassion and charity when he answers the challenge thrown at him. And that his gentle words will be the instrument by which God can shine a little light into another person’s heart, and maybe save a life. I pray that that will happen many times in many different places until one day we will all live in a Culture of Life and no one need fear any more the awful memory of the long dead culture of death.

Peace be with you.

August: Devoted to the Virgin 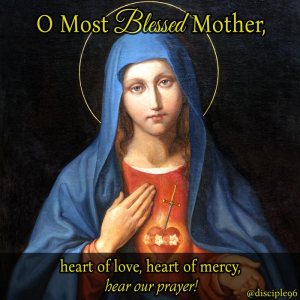 August is devoted to the Virgin.

Novena to the Immaculate Heart

O Most Blessed Mother, heart of love, heart of mercy, ever listening, caring, consoling, hear our prayer. As your children, we implore your intercession with Jesus your Son. Receive with understanding and compassion the petitions we place before you today, especially… (special intention).

We are comforted in knowing your heart is ever open to those who ask for your prayer. We trust to your gentle care and intercession, those whom we love and who are sick or lonely or hurting. Help all of us, Holy Mother, to bear our burdens in this life until we may share eternal life and peace with God forever.
Amen. 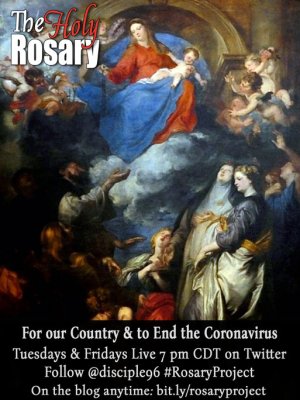